André Pinto, told us that when he was a child he saw this “orange monster” arriving at Fundão station and was amazed at its size and shape. This image, accompanied by the sound of his whistle entering the station, remained forever etched in his imagination.

Years later, André decided to combine his passion for Lego with his taste for this locomotive and this is how this small but extraordinary piece was born. 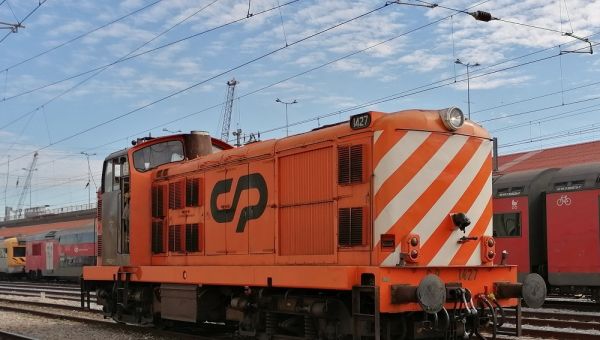 Lego and the real locomotive

One day, the 42-year-old architect contacted the National Railway Museum saying he had had a locomotive made out of Lego parts and would like to see it at the Museum. This is how the small (great) marvel arrived, now part of the Museum’s permanent exhibition, in the space dedicated to diesel traction locomotives.

It is a room built with 14,000 Lego pieces, in 1/15 scale. André says it was a big challenge to build this locomotive. One of the ideas was to make the wheels, only with lego parts, without resorting to 3D printing or other resources. The result is extraordinary, a wheel made up of 19 parts.
You can now enjoy this surprising piece at the National Railway Museum, Tuesday to Sunday, 10 a.m. to 6 p.m.
The photograph of the CP 1427 diesel locomotive was kindly provided by CP-Comboios de Portugal.