MANILA, Philippines â€” As the world races to the tipping point of climate catastrophe, children in the Philippines and beyond are suffering from climate and ecological anxiety and distress.

A preliminary study by The Lancet, a highly respected scientific and medical journal, used the term eco-anxiety which it says is characterized by a wide range of painful and complex emotions such as worry, fear, anger, grief, despair, guilt. , shame and hope linked to the climate crisis.

Events that cause eco-anxiety, according to the study, include storms, wildfires, changing landscapes and rising temperatures which are all linked to climate change.

â€œThese experiences were seen as understandable, congruent and healthy responses to the threats we face,â€ the study said.

â€œHowever, their intensity and complexity can be experienced as relentless psychological stress,â€ he said.

In another journal, Nature, also peer-reviewed, researcher Sarah Ray said the study “provides a case for anyone with a connection to youth mental health.”

â€œClimate change is a real dimension of their mental health issues,â€ Ray said.

“These countries were chosen to reflect populations in the North and South, representing a range of cultures, incomes, climates, climate vulnerabilities and exposure to different intensities of climate-related events,” the study says. .

The researchers analyzed the responses of 10,000 participants, 51% of whom were men and 49% women, who responded to the survey.

The first set of questions included:

The results showed that the majority of respondents reported a significant amount of worry. More than 60 percent said they feel very worried (32 percent) or extremely worried (27 percent) about climate change. 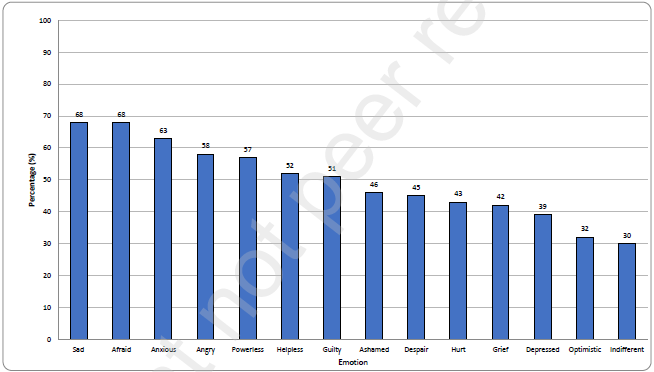 Screenshot of the preprint study.

At least 25 percent felt moderately worried, 11 percent were a little worried, while five percent said they were not worried about climate change.

The countries where most respondents felt â€œvery worriedâ€ and â€œextremely worriedâ€ were from countries that are experiencing severe impacts of climate change, including: 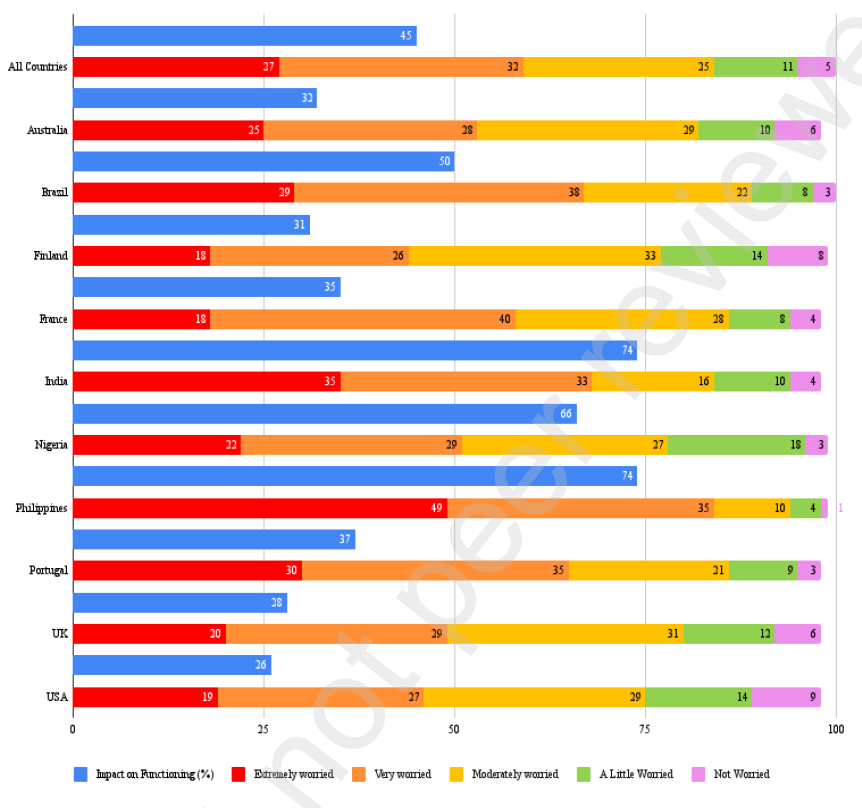 Screenshot of the preprint study.

Among high-income countries, Portugal, which suffered from intense forest fires, had the highest rate of very worried and extremely worried respondents, at 65%.

Emotions associated with climatic disasters were measured in percentages:

Screenshot of the preprint study

A high percentage of respondents also said they have negative thoughts due to climate change, such as:

Unfortunately, the concerns and opinions of young people about climate change are often ignored, according to the study’s findings.

Of those who said they spoke with others about climate change (about 81.2 percent of total respondents), almost half or 48.4 percent said other people ignored or dismissed them.

“The results of thoughts and feelings about climate change varied widely from country to country, but were remarkably present in all populations,” the study said.

The researchers also found that respondents “tended to rate the government’s response negatively.”

More participants agreed on negative statements about the government’s response, including:

While positive statements about the government’s response were only 30 percent:

“The results show that the distress seems to be greatest when people think the government’s response is inadequate,” the researchers noted.

Respondents from the Philippines believed the government had lied about the impact of climate change action (69%), let young people down (68%), betrayed future generations (56%) and rejected l youth call to action (53 percent).

Yet 52% said the government was acting on climate change.

“The distress in the face of climate change is associated with the fact that young people perceive that they have no future, that humanity is doomed, that governments are not responding adequately, and with feelings of betrayal and abandonment on the part of governments and adults, â€the study said.

“The failure of governments to adequately tackle climate change and its impact on younger generations is potentially moral prejudice,” he said.

“Nations must respond to protect the mental health of children and young people by engaging in ethical, collective and policy-based action against climate change,” he added.

Why is this important

The study raises awareness of the discussion about the critical impacts of climate change on the mental health and morals of children around the world.

The researchers explained that the psychological burdens of climate change, coupled with the moral wounds caused by disdainful adults or governments, are chronic stressors that will have “significant, lasting and progressive negative implications for the mental health of children and adults.
young people.”

They also argued that the negative emotions, or climate anxiety and eco-anxiety, felt by children in the face of the climate crisis are important because they show that the younger generation cares about the world.

â€œClimate anxiety may not be a mental illness, but the realities of climate change and the failure of governments to act are chronic, long-term and potentially unavoidable stressors; conditions under which mental health problems will worsen, â€the researchers said.

“Such high levels of distress, functional impact and feelings of betrayal will inevitably have an impact on the mental health of children and youth,” they added.

The study is also pushing adults and the government to take responsibility for eco-anxiety in young people.

“We argue that the failure of governments to adequately reduce, prevent or mitigate climate change contributes to psychological distress, moral injury and injustice,” the study said.

â€œClimate anxiety in children and youth should not be seen as simply caused by ecological disaster, it is also caused by more powerful ‘others’ (adults and governments) failing to act on the threats they face. are facing, â€he continued.

As one respondent put it to the researchers, â€œI don’t want to die. But I don’t want to live in a world that doesn’t care about children and animals.