MEKNES, Morocco (AFP) — Dozens of Jews traveled to the Moroccan city of Meknes this week for the first such pilgrimage since the 1960s, after the Muslim kingdom restored the city’s Jewish cemetery.

Their return to the cemetery, which bears witness to a centuries-old Jewish presence in the North African country, came a year and a half after Rabat reestablished ties with Israel, which has a large community of Moroccan Jews.

The pilgrims, many of them of Moroccan descent, took part in ceremonies under tight security on Wednesday and Thursday to honor the “tsadikim”, prominent rabbis, buried at the site.

“It is an immense pride to come to Meknes in the footsteps of my ancestors who rest here”, declared a young rabbi who was visiting Morocco for the first time.

Franco-Moroccan stalwart André Derhy, 86, said he was at a loss for words.

“It’s wonderful to be back in my hometown after so many years,” he says.

The cemetery was founded in 1682 for the Jews of the mellah of Meknes, or Jewish quarter.

Members of the Jewish community pray at a Jewish cemetery in the city of Meknes, in northern Morocco, on May 18, 2022. (FADEL SENNA / AFP)

He was one of 160 across Morocco to benefit from a renovation program since 2010.

Morocco, which had had a Jewish community since antiquity, was one of the main destinations for Jews expelled from Spain and Portugal at the end of the 15th century. 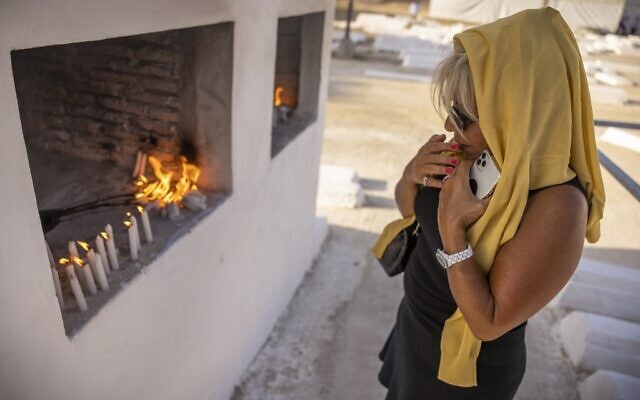 A member of the Jewish community lights a candle in a Jewish cemetery in the city of Meknes, in northern Morocco, on May 18, 2022. (FADEL SENNA / AFP)

It is still the largest in North Africa.

Many of Israel’s 700,000 Jews of Moroccan descent have maintained close ties to the country.

This week, those ties were visible as around 100 candle-carrying pilgrims walked among the white headstones.

Some prayed fervently at the shrine of Rabbi Raphael Berdugo, a 19th century “master of the Torah”. A member of the Jewish community in a Jewish cemetery in the city of Meknes, in northern Morocco, on May 18, 2022. (FADEL SENNA / AFP)

“This gathering is proof that you can transform a field of ruins into a place that keeps alive the memory of Moroccan Jews,” said Serge Berdugo, head of the Jewish Council of Morocco.

Rabat’s normalization with Israel has drawn only moderate protests in Morocco despite broad public support for the Palestinian cause.

Yousseph Israel, from the northern city of Tetouan, said Morocco “has always been an example of religious coexistence”. He is a judge at the Hebrew court in Casablanca; Jews in Morocco are allowed to settle family matters under Jewish law.

Israelis were allowed to visit the kingdom even before relations were restored. Morocco now hopes newly established air links with Israel will boost the number of Jewish visitors from around 60,000 a year to 200,000. 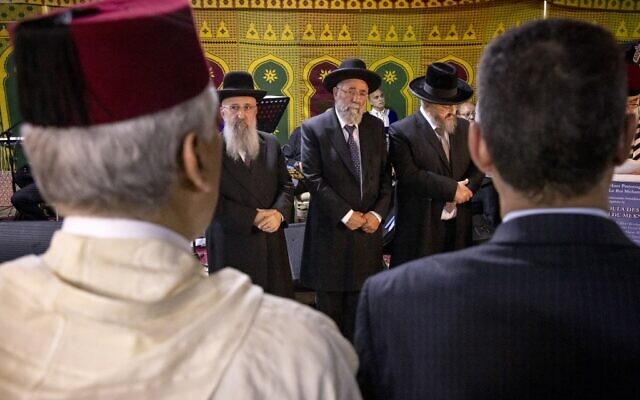 Members of the Jewish community gather at a Jewish cemetery in the city of Meknes, in northern Morocco, on May 18, 2022. (FADEL SENNA / AFP)

Gilles Berdugo, an Israeli citizen from Meknes, said he was returning to the country for the first time since leaving in 1970 at the age of 11.

“All my memories came back to me, it was like I had never left the country,” he said.

For his son, Avishai, it is “as if we had finally found a missing piece of the family puzzle”. Members of the Jewish community light a candle in a Jewish cemetery in the city of Meknes, in northern Morocco, on May 18, 2022. (FADEL SENNA / AFP)

You are a dedicated reader

We’re really glad you read X Articles from The Times of Israel over the past month.

That’s why we started The Times of Israel ten years ago – to provide discerning readers like you with must-read coverage of Israel and the Jewish world.

So now we have a request. Unlike other media, we don’t have a paywall in place. But since the journalism we do is expensive, we invite readers to whom The Times of Israel has become important to support our work by joining The Times of Israel community.

For just $6 a month, you can help support our quality journalism while benefiting from The Times of Israel WITHOUT ADVERTISINGas well as access Exclusive Content only available to members of the Times of Israel community.

Thanks,
David Horovitz, founding editor of The Times of Israel

Already a member? Log in to stop seeing this