JTA – Occult practices and totems are a mainstay of the Halloween season, and sage packets, altars, and crystals are an increasingly trendy way to get started in fortune telling and witchcraft. But the frightening supernatural world also has a long history in Judaism, and modern “Jews” encourage connection – though their practices often differ slightly from those of their non-Jewish contemporaries.

â€œI don’t burn sage,â€ said Zo Jacobi, who runs Jewitches, a popular Blog and Podcast which delves deeply into ancient Jewish myths and folklore practices. The sage-related ritual of â€œsmudging,â€ an indigenous ceremony popular among modern witches to cleanse a person or place of negative energy, â€œis not a Jewish practice,â€ she said. â€œBut the Jews had crystals. In fact, they were called “gems”.

Jacobi and his peers are revitalizing ancient Jewish witchcraft practices, which have seen some kind of revival in recent times. Far from having a difficult relationship with the practitioners of magic, Judaism – or at least its Kabbalistic aspects – has long adopted them.

Jacobi, based in Los Angeles, studies the role of these gems in Jewish ritual, as well as the connections between various other magical artifacts and Judaica. Eight shelves in her house are filled with books on Judaism as well as Jewish magic, witchcraft and folklore.

His studies have revealed the historical ways in which objects such as gems were used in Jewish magical correspondence. Like healing crystals, gemstones are meant to protect and heal based on their properties, according to the Midrash (Numbers Rabbah 2: 7) or the rabbinical interpretation of the Bible. For example, sapphire was believed to strengthen eyesight.

By registering, you accept the conditions

â€œIt’s in a medieval text called ‘Sefer Ha-Gematriaot’,â€ Jacobi said. â€œBut even if we go to Torah, we see crystals on the breastplates of kohanim [high priests of Israel]. “

Many Jewish rituals today are rooted in repelling demons, ghosts, and other mythological creatures. when we glass breakage at a wedding, scholars say, we don’t just remember the destruction of the Temple; we also scare off evil spirits who might want to hurt the bride and groom. Likewise, the ancient Jews believed that the mezuzah – a small box affixed to the door jamb containing Bible verses on parchment – protected them from messengers of evil, a function parallel to that of an amulet or a lucky charm.

“The mezuzah is absolutely an amulet,” said Rebekah Erev, a Jewish feminist artist, activist, and kohenet (Hebrew priestxx, a neutral term for “priest” or “priestess”) who uses the pronouns they / them and teaches classes in line on Jewish magic. “I consider it a reminder of the presence of the spirit, of the goddess, of shechinah [the dwelling or settling of the divine presence of God]. Much of the magic is remembering that we are all connected and everything is alive and bustling. 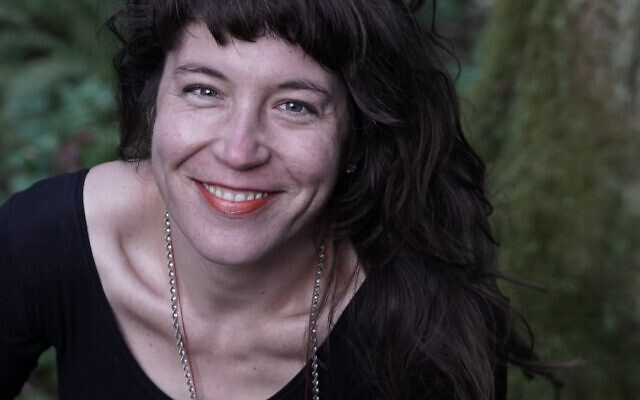 The nickname “Jewitch” itself can be seen as controversial within the group. Erev first heard the term during a 2014 â€œJewitch Collectiveâ€ retreat in the Bay Area.

â€œI think any word that identifies someone as a witch is controversial in nature due to the way in which society, including Jewish society, has demonized witches leading to violence and ostracism,â€ said Erev, even if they consider witchcraft and Judaism to be major. principles of their life.

â€œBeing Jewish and being a witch has had serious repercussions over time. I hope the recent popularity of the term ‘Jewitch’ will bring more acceptance and understanding of both identities and help make our practices more widely accessible, â€they said. 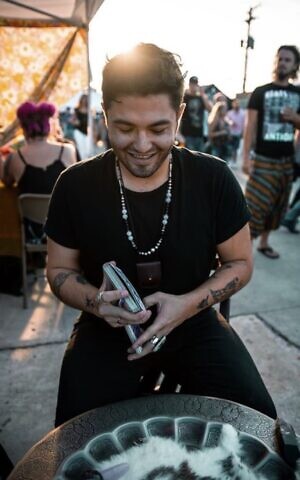 “Almost all of our Jewish spells are for healing,” Cooper Kaminsky says. (Colin Lloyd / via JTA)

Cooper Kaminsky, an intuitive artist and healer based in Denver, agreed that the coat rack was “revisionist” to some, but added, “Many, including myself, are empowered by identifying themselves as a Jewitch.”

Historically, as Judaic practices became more patriarchal, women were exempt from studying the Talmud and Torah. They knew little Hebrew, so they created their own Yiddish prayers, used herbal remedies, and centered their religious practices around the earth.

Erev reflects these customs by creating magical rituals, such as meditating on cinnamon sticks during the Jewish month of Shvat, recalling how the cinnamon trees of Jerusalem perfumed the land during harvest.

â€œThere is a kabbalistic idea of â€‹â€‹making oneself smaller so that creation emerges. Connecting with a cinnamon stick is a simple ritual. The cinnamon folds up and the bark contracts on itself, â€Erev said. “Sometimes contracting inward can give us space to emerge and create.”

They also do spells, creating spells for new love, pregnancy protection and social justice; on their blog they shared a incantation designed to increase awareness of return movements from indigenous lands.

The goal of many â€œJewitchâ€ educators and practitioners, they say, is to shed light on rituals that have been forgotten or buried for self-preservation. Jacobi believes that many folk practices died out after the 13th-18th centuries because at the time, Jews were considered demonic witches.

â€œJewish communities did what they thought could protect them from certain death. Part of this has come at the expense of some of these practices, â€Jacobi said. â€œInstead of supernatural reasons, they tried to give rational reasons for what they were doing. Ashkenazi Jews have regularly tried to argue with their oppressors in the hope that they could outsmart anti-Semitism.

This traumatic story, say the Jewitches, is often covered up or dismissed as “myths” and “superstitions”. â€œSaying ‘superstition’ is one way of downplaying our magic,â€ Kaminsky said. “We protect ourselves because, historically, so much of our oppression has been because we are magical.” 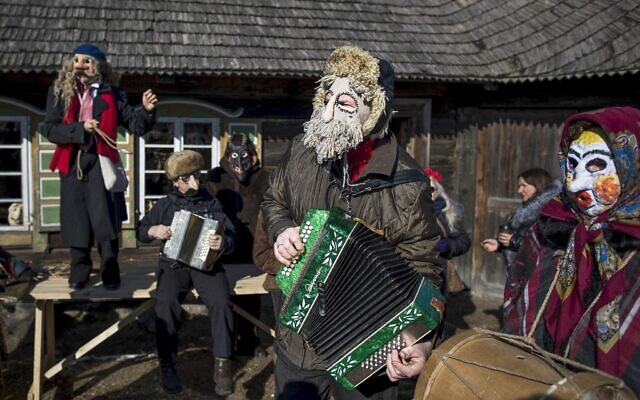 Illustration: Performers disguised as devils, goats, witches and others take to the streets to chase away winter during celebrations in Lithuania, March 2, 2019 (AP Photo / Mindaugas Kulbis)

Kaminsky, who uses the they / them pronouns, does spiritual readings for clients who draw on Kabbalah, Tarot, and the Akashic records – a reference library of everything that has happened that spiritual mediums think of. that it resides in another dimension. Kaminsky incorporates Jewish prayers into their spell, such as the recitation of the Psalms of David during candle spells and the B’sheim Hashem as a magical invocation.

Kaminsky grew up in a conservative Jewish family and learned the basic concepts of Kabbalah in the Jewish school.

â€œKabbalah looks at Judaism through a cosmic and mystical lens that marked me much more than looking at a Torah story,â€ they said. “As I read more Kabbalah, I started to feel more connected to my Judaism.”

Various scholars and rabbis have linked Kabbalah with Tarot, a card game originally used in the mid-15th century to play games that evolved into divinatory practices in the 18th century (although Jacobi, for example, refutes this idea, claiming the connection has never been proven). The major arcana of tarot – the strengths of the game, which detail the evolution of the soul – usually make up 22 cards in a given deck, a significant Jewish number: the same as the number of letters in the aleph-bet, and the number of paths on the Kabbalistic Tree of Life.

For their energetic work, Kaminsky draws parallels between the chakras, the energetic points of the body discussed in Hinduism and the kabbalistic tree of life. 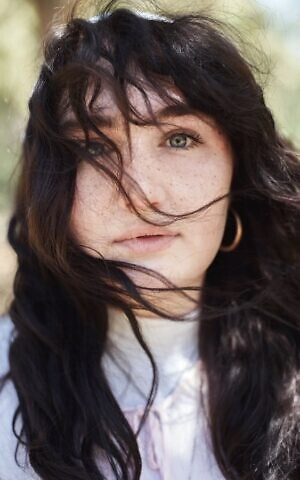 â€œThe Tree of Life is a network of energy,â€ they said. “There are the energy meridians, and the chakras are like the middle pillar.”

Thanks to these experiences, Jacobi lives at ease out of the (broom) closet – an ironic term some modern witches use to refer to the open practice of witchcraft. She grew up with astrology, used tarot cards on Shabbat, and played with her mother’s rose quartz crystal ball while her father led the Havdalah prayers. The Jewitches blog and podcast are filled with mythological creatures with origins in Jewish beliefs, such as dybbuks, werewolves, dragons and vampires.

Some creatures are unique to Jewish lore: the vampiric Alukah, a blood-sucking witch mentioned in Proverbs 30, turned out to be Lilith’s daughter, while a Broxa originated from a bird in medieval Portugal that drank goat’s milk and sometimes human blood overnight.

â€œWhenever there have been difficult times throughout history, people have turned to mysticism; this is how Kabbalah emerged, â€Erev said. â€œWe have to look to our ancestors for guidance. There are many tools in our human community to heal, re-dream, and create a safe and generative world for all beings. “

Kaminsky believes magic has the power to mend the world: â€œAlmost all of our Jewish spells are for healing. Tikkun olam, using our magic to fix the world is beautiful.